A Glorious History of Greatness on the Gridiron 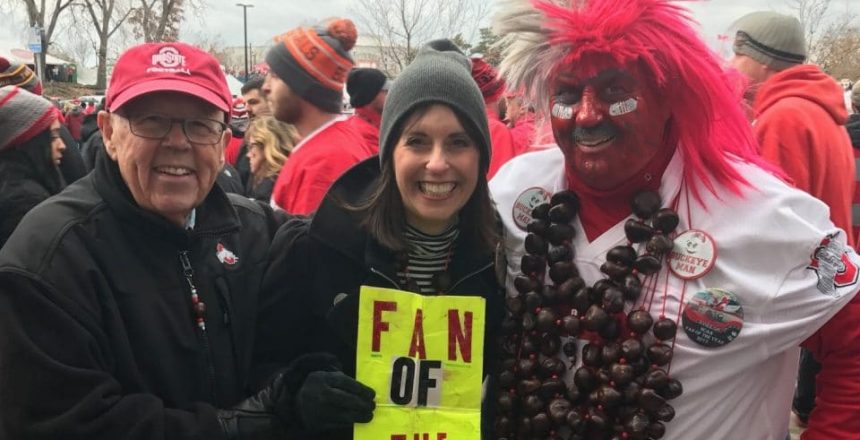 This post may seem a departure from my normal topic of Impostor Syndrome and leadership. But hey, what’s life without a little variety?

My local friends know I’m co-writing a book about Ohio State Football history. Yeah, this die-hard Notre Dame graduate (and fierce fan) has developed a split loyalty. But I love college football, and I’ve lived in Ohio for decades, so this is a good match. For your enjoyment, I’m writing some posts about the book project. Let’s begin!

Go all the way back to the late 1880’s when football, in its infancy, lumbered across the Atlantic to colleges in the United States. Nobody back then would have thought this sport, which looked more like rugby and soccer, would have mushroomed into this incredible and addictive American obsession that takes pageantry, pride, and performance to a completely different level.

Every week in the fall, college football’s frenzied fervor sweeps across this country. Columbus Ohio is no exception. The entire city is consumed with the mania surrounding The Ohio State University. Fan or not, you can’t get too far from the electricity generated by the devotion to the gridiron.

It’s a rich history, filled with ups, downs, wins, and losses. Legends and leaders were made at Ohio State, and it all goes back to 1890.

Ohio State’s first game was a 20-14 victory at Ohio Wesleyan University in Delaware on Saturday, May 3, 1890. Quarterback Joseph Large scored OSU’s first touchdown. The Buckeyes played three more games in November, losing all three — 0-64 at home to Wooster, 0-14 at Denison, and 10-18 at home to Kenyon on Thanksgiving Day. But the football “bug” bit hard, and Columbus would never be the same.

Over its 127 year history, there have been dozens of coaches, hundreds of games and thousands of players. The stories from these years capture the best of the human spirit, entertaining and challenging us today. For example:

These are just a handful of the hundreds of stories you’ll find in the soon-to-be-released book “Buckeye Reflections: Legendary Moments From Ohio State Football” by me and Jack Park. Jack is the unquestionable expert on Ohio State history. The amount of information he knows about OSU is uncanny, and I think this book will fascinate you!

It’s scheduled to be released mid-November, so stay tuned for updates. If you want to be on the mailing list for updates and news, go to the link at

We hope you love reading this book every bit as much as we loved writing it!

(Here’s a sneak preview of the cover! Check out the great contributors for the forward and introduction!)