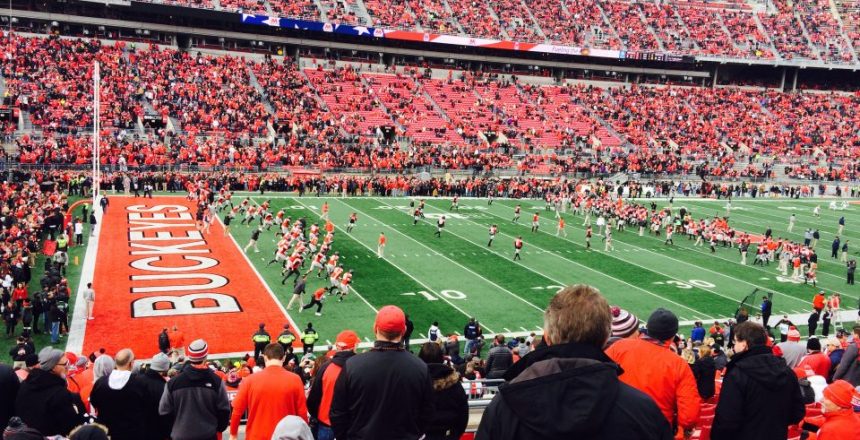 “Hey, Maureen,” said my good friend Jack. “I have a great idea! Why don’t you and I co-write a book together?”

I stared at Jack and screamed silently to myself, “Are you kidding? I can’t do that! That’s absurd.”

Years ago, I met Jack Park at a gathering of the Ohio chapter of the National Speakers Association. He’s kind of a legend here in Ohio. He’s a noted football analyst and historian for Ohio State University football, and radio commentator for Sports Radio 97.1 The Fan in Columbus, Ohio. He writes columns, does interviews and gives speeches all over the country about OSU. His knowledge of college football history is unparalleled, and he’s contributed pieces of his football brilliance to ESPN, the Big Ten Network and HBO. I love college football and I loved listening to him tell stories.

One day, after he entertained a group of us with yet another amazing and astounding OSU football story, I said, “Jack, you need to get these stories in a book!” He said, “Actually, I have a few books already. But my last one was about 15 years ago. Maybe it’s time for another.”

Several weeks later, he called me. “Maureen, I just finished reading a magazine article you wrote, and I’m really impressed! I like your writing style. I have an idea. Since I have stories, and you like to write, how about if you and I co-write a book about Ohio State football?”

As I said before, I thought the request was absurd. I love college football, but I didn’t go to Ohio State University. I went to the University of Notre Dame. I thought “I don’t know anything about OSU football! I can’t do this! What can I contribute to a book like this? Jack Park knows EVERYTHING, and I know nothing! Everyone will figure out I’m just faking this!”

“I’m just faking this.” That was my Impostor voice creeping in. It’s the voice that says “You’re not as smart as you appear. You’re a fraud, faking your way through life.” Seriously, it was crippling me.

But I’ve studied this Impostor Syndrome enough to know that because it’s a cognitive problem, it is best addressed with a cognitive solution. If you are ever faced with that inner critic that’s stopping you from moving forward, you need to shift your thinking. That day, I used what I call my “Tri-C” approach.

I captured the thought (recognize the Impostor’s limiting beliefs).

I challenged the thought. (Ask “Is this true?”).

I countered the thought. (State truth and act accordingly.)

Here’s how the internal conversation went in my head after Jack proposed this book project:

“There I go again, giving air time to my Impostor’s voice. Is it really true I know nothing about OSU football? Yes. But because Jack knows everything, I don’t need to. Is it true that I’m a good writer like Jack says? Well, based on others’ feedback, and based on the fact I’m a regular contributor to an international magazine and get consistent positive feedback, it is true. I am also a quick learner, a good researcher and I do love football. He could provide the stories, and I can edit and add to them. It would be cool to learn more about OSU, since I’ve lived in Ohio for over 30 years. This could work. It sounds like fun. What’s the worst that could happen? I’ll do it!”

Before I knew it, I said “Yes, great idea! Let’s do it!” That was almost 2 years ago, and what a joy this journey has been. Our book, “Buckeye Reflections” is scheduled to be released in just a few weeks.

It’s been a ton of work. At times, it’s frustrating and overwhelming. But I’m glad I chose to Tri-C my Impostor voice away. And as I’ve worked on this project, I find that the impostor’s voice gets quieter and quieter. The voice that haunts success is no match for the joy of the journey of a fun and challenging project.

So, the next time you are thinking “That’s absurd! I can’t do that!” shift your thinking with the Tri-C approach. And then get to work.