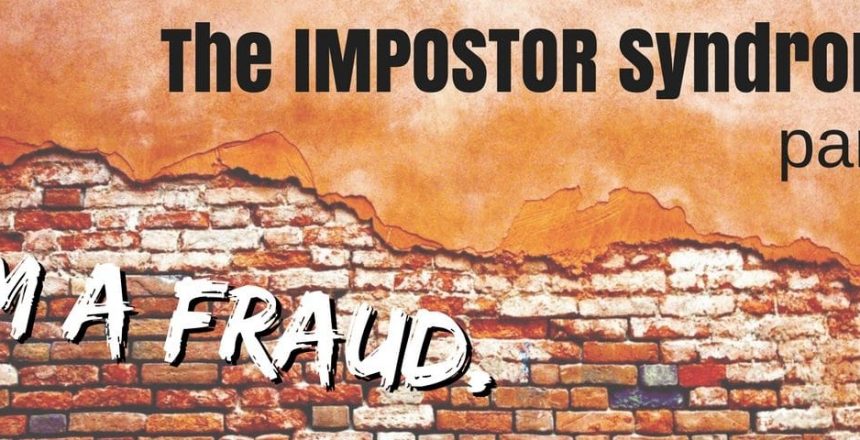 About 13 years ago, I was diligently preparing for my first paid speaking engagement. Up to this point, I had harbored a secret desire to be a professional speaker, but I had so little experience with actually speaking to audiences. I felt so inadequate. More than a few times while preparing, I repeated to myself “I am SO not the right person for this!” I was terrified of being discovered as a fraud.

The thing is, I did pretty well. I was well prepared, and my information was well received. The evaluations confirmed I did a good job, and I was so relieved. But the relief was due more to me evading discovery of ineptness than of actually delivering any value. I dodged a figurative bullet. Whew! That was close.

I suffer from “The Impostor Syndrome.” It’s the nagging feeling that “I’m a fraud. I’m not as smart, good, prepared, talented, wise, capable, adequate, knowledgeable, strong, or proficient as they think I am. I’m on the verge of being found out. I’m not who they think I am.”

Do you suffer from this too? It’s estimated that up to 70% of people do. Ironically, it’s most prevalent in highly successful people, the ones who strive for excellence, achievement and accomplishment. Margie Warrell, author of the books Stop Playing Safe and Find Your Courage writes “The Impostor Syndrome is the domain of the high achiever. Those who set the bar low are rarely it’s victim.”

It’s not necessarily a bad thing. She adds, “… if you are relating to {this information), then pat yourself on the back because it’s a sure sign that you aren’t ready to settled into the ranks of mediocrity. Rather, you’re likely to be a person who aims high and is committed to giving your very best to whatever endeavor you set your sights upon. A noble aim to be sure.”

The Impostor Syndrome carries with it a tendency to dismiss genuine success and achievements as random, accidental, unrepeatable or irrelevant. Rarely will the imposter feel ownership of the success, which then fuels the illegitimate fear that the success will be uncovered as fraudulent. When I was promoted from staff engineer to the manager of a large jet engine test facility at NASA, I was jubilant. I had years of experience in the facility, and a long list of “impressive” credentials to that point. I wanted the job. I studied the job. I worked to get the job. But when I got the job, I was tormented with the question “Did they promote me because I was a girl and they needed to fill a quota?” Good grief. Why couldn’t I just believe that I got the job because they thought I was the best person for the job?

Initially, I struggled with the job because I had huge shoes to fill. The man I replaced was an icon in our industry who left a legacy of excellence in his wake. How could I possibly do as good a job as he did?

My boss, John Schaefer could tell I was wrestling with trying to replicate the job done by my predecessor, and gave me the best advice: “ Maureen, do it your way. I promoted YOU. Not a duplicate of him. You are completely qualified for this job.”

I had to rest in the assurance that John saw something in me that I hadn’t yet seen. I had to walk in his confidence before I discovered my own. I had to trust his judgment of my skills.

Ugh. That was hard. But it was necessary. One of the 1st steps in overcoming that Impostor Syndrome is to rely on the genuine and objective observation that others see value and worth in you, and that your contributions and accomplishments are meritorious. It’s one thing to surround yourself with cheerleaders who believe in you. And it’s another thing to have cheerleaders that are accurate in their assessment of you (Seriously…haven’t you seen some really awful singers audition for American Idol, and they’re cheered on by people who are saying they’re the next greatest undiscovered platinum-record artist???)  But it’s another thing to believe their assessment, especially if their belief is buoyed by facts, data and measurable results. You simply must believe the facts. Facts will prove you are not a fraud.

Most of us may be the occasional victim of the Impostor Syndrome, but you don’t have to be it’s lifetime prisoner. Overcoming the self-limiting thinking is not a one time event, but an ongoing process. With practice and persistence, you can face these doubts, speak the truth and say with confidence (not cockiness!), “Yes, I am exactly who they think I am. I have done a lot, I know a lot, and I offer a lot. I’m OK.”